Lahore Top 19 Attractions
Lahore the City of Gardens is the most advanced city of Pakistan with 15 million inhabitants. History of Lahore can be traced back to the tenths century when it served as the capital of Kabul Shahi Empire. Later Lahore served as the capital of province Punjab during Ghaznavid, Ghourid, Mamluk, Khilji, Tughlaq, Syed, Lodhi, Mughal, Abdali, Maratha, Sikh and British Empires. Mughal and British Empires paid great attention to build Lahore. This is why we can see the beautiful buildings of Mughal and British era in Lahore. Lahore is now the number one tourist destination of Pakistan due to architectural masterpieces, beautiful gardens and shopping centers. This blog describes the Lahore Top 19 Attractions & tourist attractions of Lahore. 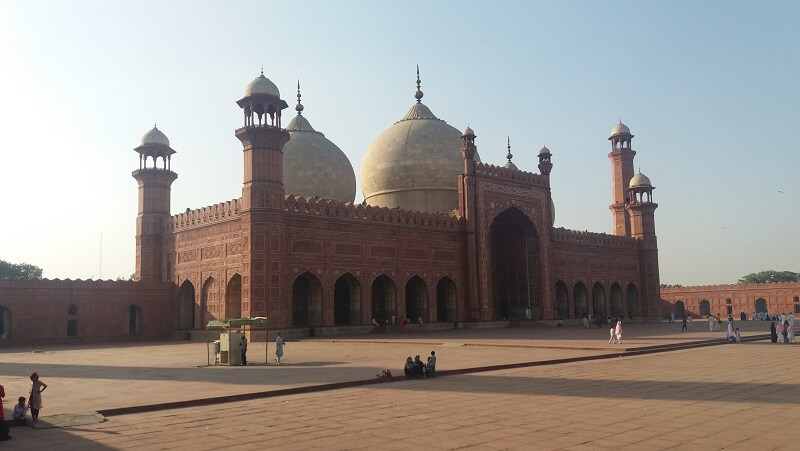 Badshahi Masjid is an imperial mosque built during the reign of 6th Mughal Emperor Alamgir 1 from 1671 to 1673. The mosque has square plan with main prayer chamber and vast courtyard that can accommodate 100,000 worshipers. The salient features of the mosque are the eight minarets and three domes. The materials used in the mosque are brick, white marble and red sand stone. Badshahi Masjid is the #1 tourist attraction of Lahore that has been extensively filmed and photographed. Many people prefer to hold their NIKKAH Ceremonies in Badshahi Mosque to make the weddings memorable. Bagh-E-Jinnah is a vast garden located on Mall Road Lahore. It was developed during the British Raj Period as a botanical garden. Its old name is Lawrence Garden and after the creation of Pakistan name was changed to Bagh-E-Jinnah or garden of Jinnah. The total area of the garden is 141 acres. Garden houses Jinnah Library, Jinnah Cricket Ground, lawns, lush green parks and many species of creepers, flowers, palms, shrubs and trees. Bagh-E-Jinnah is famous among the tourists. People love to spend time in Bagh-E-Jinnah due to its natural beauty and healthy atmosphere. Fortress Stadium is located in Lahore Cantonment. It can be easily approached from Mall Road and Shami Road. Fortress Stadium has vast ground which is used for many ceremonies and events including the famous Horse & Cattle Show. Now it has emerged as one of the top commercial and recreational hub of Lahore. Millions of people visit Fortress Stadium annually. It has shopping centers, boutiques, restaurants, cinemas and outlets of shoes, dresses, cosmetics and jewelry. Another famous attraction of Fortress Stadium is the Alladin Amusement Park for the kids and families. Lahore Top 19 Attractions. 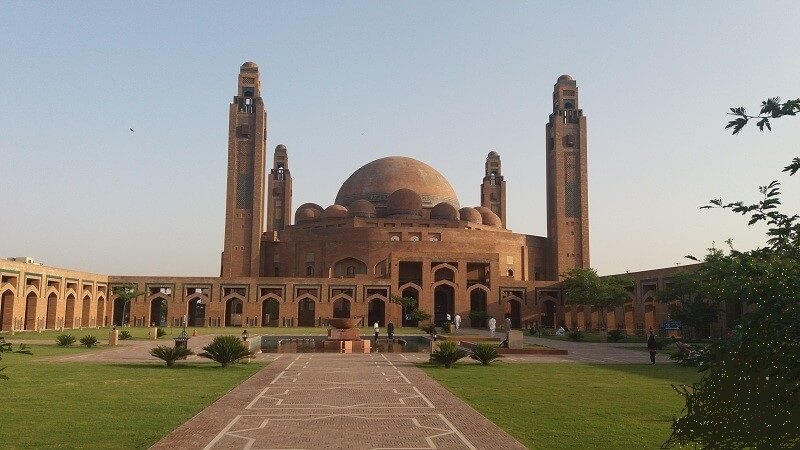 Grand Jamia Mosque is located in Bahria Town Lahore. The mosque has capacity to accommodate 70,000 worshipers. It is the third largest mosque of Pakistan after Faisal Mosque and Badshahi Mosque. Grand Jamia Mosque layout & design is inspired by Selimiye Mosque Edirne, whereas mosaic tile work has influence of Wazir Khan Mosque Lahore. The salient features of the mosque are the large central dome, four 150 feet tall minarets and spacious courtyard. Many people visit the Grand Jamia Mosque as it is fast becoming one of the top tourist attractions of Lahore. 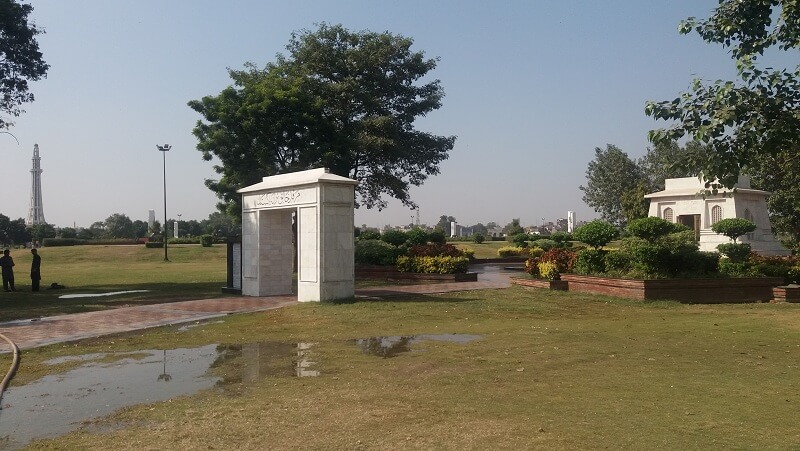 Jallo Park is a man made urban jungle located in Lahore. It was developed in 1978 on 461 acres land. The park houses many breeds of birds & animals and large species of trees & flowers. For science researchers Jallo Park is famous due to the Botanical Park and Breeding Center of the Animals & Birds. For tourists Jallo has many attractions like parrots, deer, butterfly house, restaurants, café, lush green play areas, lake for boating & fishing and sports complex. People who want to visit Jallo Park can approach from Lahore Ring Road or Canal road. Lahore Museum is the oldest and most visited Museum of Pakistan. The Museum is located on Mall Road near Anarkali and just opposite to Punjab University. It was founded during the British Raj period in 1865 on the site of Punjab Exhibition. Later it was shifted to the magnificent building designed by the renowned architect Sir Ganga Ram. It has the large collection of artifacts of Gandhara Civilization, Mughal Empire, Sikh Shahi and British Raj Period. Lahore Museum is always packed with the tourists who love to explore the civilizations. Lahore Zoo is located on Mall Road Lahore just near to Alfalah Chowk, Punjab Assembly and WAPDA House. Lahore zoo is the 4th oldest zoo of the world and was established by during British Raj Period in late 19th century. Lahore zoo has all the famous animals like Tiger, Cheetah, Lion, Blue Bull, Deer, Antelope, Bear, Elephant, Hippo, Monkey, Gull, Peacock, Giraffe and Rhino. Lahore Zoo is one of the top tourist attractions of Lahore. Children and families love to visit Lahore Zoo to see the wild animals. For the entertainment of the tourists, Lahore Zoo has lush green parks and restaurants and cafes. Jilani Park AKA Race Course Park is a large green area in Lahore’s heart on Jail Road. The park is famous among the adults and children as recreational hotspot. It’s called Race Course Park as annual horse race competitions are held there. The park has total area of eighty eight acres. The salient features are the lake, children play areas, water fall, canals, cricket grounds, jogging track and different species of trees, plants, flowers & shrubs. Park also has a study hall and gym. Race Course Park is one of the most visited places in Lahore. During weekends you can see many tourists in the park. Shahi Hamman or Royal Bath is a Turkish Bath of Mughal Era located in Walled City Lahore just near to Wazir Khan Mosque. The Royal Bath was built in 1635 by Governor of Lahore Wazir Khan for the maintenance of Wazir Khan Mosque. Shahi Bath layout has reception, dressing area, warm bath area and steam bath area. The modern spas and massage centers are the modified forms of the Turkish baths. The stunning features of Shahi Hammam are the skylights and beautiful paintings of Shah Jahan period for example the conquest of Kandahar in 1638. 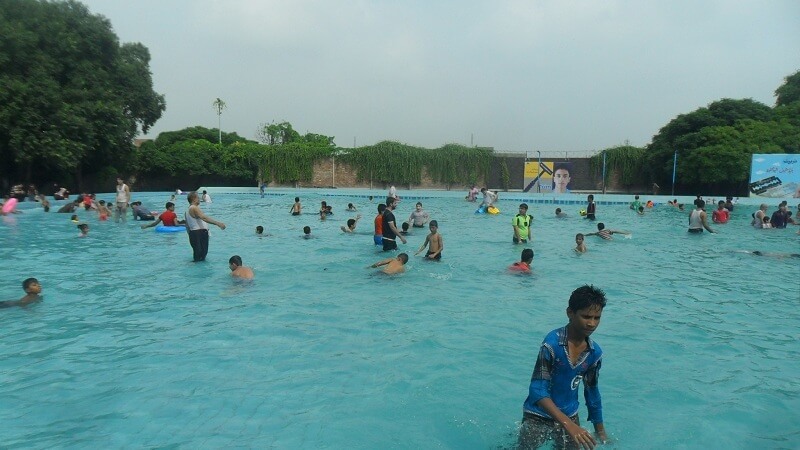 Sozo Water Park is an amusement park in Lahore. It is situated on Main G.T. Road Lahore just near to Quaid E Azam Interchange. The park has two sections, one for gents and other for ladies & kids. Sozo Water Park has swimming pools, slides, swings, cafeterias and lush green lawns to accommodate ten thousand people. Sozo Water Park has a large parking area for thousand plus cars and motor cycles. The park is always full of the visitors on weekends and holidays especially in summer season. Many people love to enjoy the B.B.Q parties in Sozo Water Park. Lahore Top 19 Attractions Maqbara Asif Khan is located in Shahdara Lahore. Nawab Asif Khan AKA Abul Hassan Jah was the Prime Minster of the Mughal Empire. Asif Khan is also famous as the father of Queen Mumtaz Mahal the lady of Taj Mahal. Asif Khan died in 1641 and Shah Jahan ordered the mausoleum for the Nawab. The tomb is octagonal in plan with a massive central dome. According to the European travelers of 17th century, the tomb was famous for its interior and exterior decorations and appeared from far away as a shining gem. Now the Tomb Complex is famous among the tourists due to its Chahar Bagh lawns. Maqbara Jahangir in Shahdara Lahore was construction by Emperor Shah Jahan 1 as the resting place of his father Emperor Jahangir who died in 1627. The tomb was originally built in Dikusha Garden of Queen Noor Jahan which has vanished with the time. The entrance of the tomb is from Akbari Sarai. The Tomb is laid out in famous Chahar Bagh style. It is square in plan with 100 feet tall minarets on four corners. The structure is made of bricks and clad in red sand stone and marble of different colors. It is famous among the tourists due to the gardens, trees and fountains. Noor Jahan was the favorite wife of Emperor Jahangir. She was the only Mughal Queen who ruled from behind the curtain like Ottoman Sultan Mothers. She was imprisoned by new Emperor Shah Jahan 1 from 1628 to till her death in 1645. Nur Jahan built her own tomb in Dilkusha Bagh adjacent to the tombs of Jahangir and Asif Khan. Nur Jahan Tomb is square in plan and was laid out in Chahar Bagh Style. During Sikh times, tomb was stripped off its red sand stone and gems to build Golden Temple in Amritsar. Tomb and gardens are in ruins, but still famous among the tourists. Wagha Border is located in Wagha Town Lahore. It can be approached from Qauaid E Azam Interchange on Lahore Ring Road or G.T. Road. It is situated on demarcation line that divides India and Pakistan. All trade between India and Pakistan is conducted via Wagha Border Entrance. Wagha Border is also famous for the daily flag ceremony and parade of PAK Ranger Jawans. The government has nearby developed a small zoo with birds and deer for kids. Wagha border is now one of the most visited places of Lahore as flag ceremony is observed my thousands of people. Lahore Top 19 Attractions Masjid Wazir Khan is the imperial mosque located in old walled city of Lahore. Wazir Khan Masjid was commissioned in 1634 during the rule of Emperor Shah Jahan 1 by Governor of Lahore Shaikh Ilam Ud Din Ansari AKA Wazir Khan. The mosque resembles in layout out of the famous Bibi Khanum Mosque of Samarkand built by World Conqueror Amir Temur. The mosque is rectangular in plan with main prayer chamber and vast courtyard. It has six domes and four minarets.  Wazir Khan Masjid is the most richly decorated building of the Mughal Empire and is renowned for the frescoes and tile work.